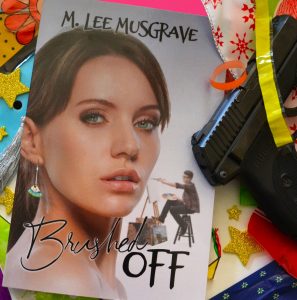 When it comes to books, I have a particular fondness for mystery novels. So, during my many decades as a member of the Los Angeles art community I often considered writing one inspired by the many relationships I developed with artists, gallerists, collectors and related others.

As a result, my first romantic suspense novel, Brushed Off, is available via publisher Black Rose Writing, Amazon, Barnes & Noble, Goodreads and other bookstores.

Book Signing @ Los Angeles Times Book Festival, April 23 & 24, 2022. I enjoyed meeting and talking with readers about Brushed Off and the sequel Off Kilter (which will be released on June 15, 2023).

If you would like to sample some of my creative noir writing, a short story prequel for Brushed Off is available at:

Quintessence  “Through a succession of bizarre events filled with romance and fraught with danger Quintessence presents a world the author knows well. An enticing whodunit full of imaginative twists whose momentum stems from a charismatic couple. They join with a homicide detective to enthrall noir readers & solve a fast-paced mystery where a graceful young woman strutting with emphatic determination, goddess-like fortitude and resolve holds a shimmering 10-inch knife at the ready.”

Episode 1 of this story is FREE. There are 6 episodes and each includes my personal comments … happy reading.

Radio Interview on www.gorgeradio.com/?pg=18138
Thank you host Marti Dane and the Mid-Columbia Today Show staff for making my visit with you so enjoyable and for posting our talk online.

The following review of Brushed Off is from Best Thrillers.

Is there a serial killer at work in Los Angeles, or just someone particularly motivated by greed, jealousy or love? Whichever the case, why has the killer chosen the LA art scene as his hunting ground? LA homicide detective Cisco Rivas, and his unlikely partner, public TV host James Terra, team up to form an unlikely crime-fighting duo in this highly original whodunnit.

Author Lee Musgrave tells the story from James’ darkly comic point of view. That makes for entertaining inner dialogue, since James is not only highly perceptive and eloquent, but also as catty as they come. James, who is also a frustrated painter, understands the ins and outs of a community that is brimming with backbiting, ego and competition for buyers. At times, such as when he sees the book’s first corpse, he can be both hilarious and callous: “He looked exhausted, as though he’d copulated with every painting he ever sired.” Musgrave has also given him some endearing characteristics. His athletic activity of choice is race-walking, and his constant companion is his relentless dog, Duchamp.

Cisco, meanwhile, is a perfect straight man to James’ eccentric perspective. Cisco barely blinks when James tells outright lies (“My last show, over at the Balladeer Gallery, was a big hit”), yet he’s not afraid to call James an arrogant art snob when he comes on too strong. While Musgrave’s other characters – such as the pornographers, actors and even extras – add terrific atmosphere. But the chemistry between James and Cisco elevates what might otherwise be a straightforward murder mystery into something memorable.

Musgrave, himself a National Endowment for Arts Fellowship recipient, brings a world he knows well to life from cover to cover. In the end, his word-craft pays off in the form of a fast-paced and satisfying mystery that, at just under 200 pages, can be enjoyed on a long flight.

“Brushed Off by M. Lee Musgrave paints an interesting and revealing series of passages about the Los Angeles art scene. The opening picture of LA’s beach community, its oddball characters, mixed with homeless wanderers draws the reader into this story as Sketchy and Duie (his dog) discover a friend dead under a pile of destroyed paintings and a totally wrecked studio. Sketchy, an artist-videographer, and his homicide detective friend set off to find answers. More suspicious deaths in the art community pressure the duo to find the killer. Looking for a link to the murders, Sketchy takes the reader deep into the lives of the artists, collectors, and beautiful people who inhabit this world of creativity. With his video documentary work as cover, the threads he discovers unravel a tapestry of crime that only an artist could perceive in the glare of so many colors.

Musgrave uses a number of conventions to depict details of color, texture, and location to convince the reader that this is a plausible tale told by an observant artist. The twist of a detective using a well-connected artist to investigate leads plays well in this adventure. Musgrave takes the reader on trips through LA and its several neighborhoods with Sketchy chasing leads, dead ends, and discoveries. He hides the motive for murder until the final segments and this lets the reader enjoy the scenes he composes in this montage of Los Angeles from its world renowned beaches to the mansions overlooking them. Brushed Off is an enjoyable mystery, especially for fans of the art world.”
—Cecil Brewer, Critic Readers Favorite

Here are more reviews of Brushed Off  from noted authors.

“Who is killing the contemporary artists of L.A.? Why are they shoving paint brushes down their victims’ throats? Who’s next on the killer’s list? In Brushed Off artist and public-TV art show host James “Sketchy” Terra finds himself smack in the middle of things, racing to help his homicide detective buddy unravel a puzzle as urgent as a splatter painting and as complex as an M.C. Escher drawing. Lee Musgrave’s swift and energetic novel pulls its readers through the studio doors into a brash and entertaining world of big ambitions, bigger egos, love and sex and secrets and shady wheeler-dealing. Calling on his long experience as an artist and curator as he cruises from the beaches and bars and galleries of L.A. to the hidden havens of the Santa Monica Mountains, Musgrave creates a compelling collage of mystery-novel action and art-world exposé as he paints a portrait of the Art of Murder.”
—Bob Hicks, two-time Pulitzer nominee and Senior Editor, Artswatch (orartswatch.org)

“Brushed-Off is a unique, atmospheric work of Los Angeles mystery fiction. Not only does author Lee Musgrave provide an engaging case, which ends in an explosive climax, but he also paints a vivid portrait of the city’s beautiful but dangerous art scene from an insider’s perspective. A welcome addition for those who enjoy contemporary L.A. noir.”
— Rick Treon, award-winning author of Deep Background and Let the Guilty Pay

5.0 out of 5 stars “An incredible LA Mystery.” Brushed Off, reviewed on Amazon March 11, 2021.
“Using LA to add to the look and feel of his prose, the author creates a unique art world space for a murder mystery. Readers will want more from this author.”
—Timothy Gene Sojka, Author of Payback Jack

“Just finished Lee’s novel Brushed Off, a great ‘who done it’ story. I got it and couldn’t put it down. It’s now available on Kindle, buy it, you’ll love it.”
— Brian Lindsay, avid book reader based in Texas.

Brushed Off by M. Lee Musgrave is a page-turner murder mystery set in Los Angeles, California. The story starts when artist James notices an out-of-place mauve Mercedes S550 creeping around his neighborhood late one night. When a string of murders suddenly rock the art community of Los Angeles, it’s up to James and his detective friend, Cisco, to investigate and find the connection between them. Working undercover, James questions the community using his connections as an artist. But, as they get closer to the truth, the stranger the circumstances surrounding the crimes become. People James once considered a suspect turn out to be innocent, while another turns up dead. Will James and Cisco solve the mystery before another victim, or will James become the next target? Only time will tell, and time is not on their side. Musgrave writes in a way that sucks the reader in from the first page. Readers will find themselves immediately wanting to know just what the person in the mauve S550 was up to. Shortly after, the first murder victim was discovered. After that, it’s a fast-paced fight to find who is behind the killings in a community where everyone seems to know everyone. All of the circumstances appear to be tied to the art collection of the late Harriet Wagner. I really enjoyed the character development within Brushed Off. There were two characters that I misjudged early on, Nicole and Camille. Both started off seeming shallow and like they were only out to use the people around them. Throughout the novel, readers will realize that there is more to them than met the eye. They were each stuck in their own less-than-ideal situation but wanted more in their lives. This fast-paced novel kind of has a Criminal Minds, or CSI feels as the murders are happening. While James and Cisco worked together to figure out who the killer was, seeing all bits and pieces come together was fascinating. Readers will be shocked as the story starts to come to a close and new information is revealed. It was interesting to see how art was worked into the crimes in an unusual way, which wasn’t discovered until the book was wrapping up. Brushed Off is a riveting mystery crime novel that will keep readers guessing till the last pages. This is a contemporary sleuth book with strong women characters.                      Silver Star Award Winner, Literary Titan 2/14/22

I’ve completed Off Kilter, the sequel to Brushed Off and it features more adventures by Nicole, James, Cisco and a new member of the team, Merra Dawne. It will be released on June 15, 2023. 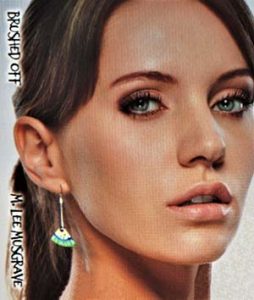 Brief Author Bio
As a former professor of art and curator for 30 years, I organized hundreds of exhibitions at museums, galleries, and municipal venues involving artists, collectors, critics, gallerists, art professionals and a vast array of related enthusiasts. My writings related to those exhibitions contributed to their success and to my ability to relate that community to others. Plus, I lived in Los Angeles for over 40 years including in Malibu Canyon and Santa Monica. Those many experiences and my ongoing personal art activities inform my creative writing about today’s exciting and engaging contemporary art community.

When it comes to other authors, I especially enjoy Raymond Chandler’s approach to story, character and location, as well as that of Dashiell Hammett, Ross Macdonald, James Ellroy, Walter Mosley, Michael Connelly and many others.

I have completed several Brushed Off prequel short stories and if you read the book then post a positive review let me know (lee@leemusgrave.com) for I will send you a free prequel story as well as enter your name in a chance to win one of many surprise gifts including the earrings featured on the cover.